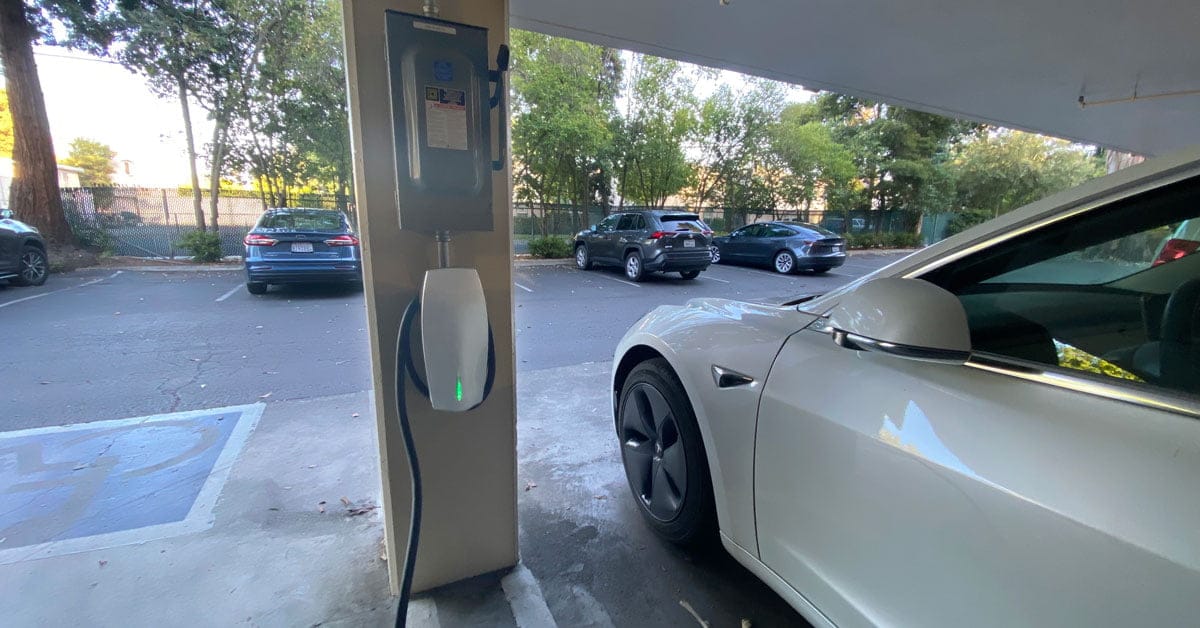 The Tesla Wall Connector is a charging station for your car that is available in the Tesla online shop. It’s a convenient way to keep your car topped up at home or at work.

But did you know you can make money by charging people to use your Tesla wall connector?

What is a Tesla Wall Connector?

In 2020, Tesla launched the Wall Connector Gen 3, a home charging station with Wi-Fi connectivity. Like prior generations, the wall connector is sold to Tesla owners with their online store for level 2, 240v charging at up to 44 miles of range per hour.

When using a wall connector, the electricity is paid for by the property owner. That is, the person or company that owns the meter where the charger is hooked up. It doesn’t matter who own’s the Tesla.

That is… until now.

Recently, the Wi-Fi connectivity of the wall charger enabled Tesla to add the ability for commercial establishments to begin billing car owners for Wall Connector usage.

The problem is, there is no way to know upfront whether you are going to be billed for using a wall connector, or even at what rate you will be charged.

As an example, a few months ago I used a wall connector at a parking space that was labelled “clean air vehicle guest”.

I plugged in and after 90 minutes, had a few percent of charge added. That was a nice perk and it was free. It’s wonderful when businesses offer free charging to EV owners while you shop.

Fast forward to today, everything looks the same, only this time I return to the car and get a notification on my app that I am getting billed $1.50. I was confused, but after going though my billing history, there it was, an invoice / receipt for charging.

I’m not sure, but I think it billed me quantity 6 of 25 cents per kWh?

While this isn’t an astronomical amount, it was not authorized by me, and I’m a little angry.

It’s shady. There was no physical signage notifying about billing. Nor was there any indication on the wall connector, or the touchscreen that I was hooked up to a billing enabled charger. There was no notification of billing rates, or that billing would automatically take place. There was only the pop-up after the deed was done.

In fact, it looked just like a regular home charger (the Tesla shop’s wall connector) up until the billing receipt was presented.

Can you spot any difference?

This is unlike other charging stations that tell you up front the billing rate, and whether you are being charged by the kWh or by the hour. They also ask you to login or swipe your credit card.

Even Tesla Superchargers tell you the billing rate on the touchscreen before you hook up.

There was also no cumulative billing total while charging – like a regular gas pump, which lets you know in real time what your bill is going to be.

The real problem is that the wall connector is the exact one in the shop for residential usage, so there is a natural expectation that it is free. Also, the prior generations of wall connectors could not bill, so those were free too.

While there are some destination chargers on the Tesla map, not all of these billing wall connectors are shown there.

Turns out, the property owner must apply to appear on the Tesla map, and they must meet some requirements: have regular business hours, offer goods and services, have full-time employees on site. Thus, some of these businesses operate in stealth mode. only to be found by accident or word-of-mouth.

And one more gem you’ll love, which I’ll cover later on at the end.

If you plug in a wall connector that is configured for automatic billing, then as soon as you plug it in, and before charging starts, a notification should pop up on the touch screen.

This lets you explicitly consent to billing.

Next, there should be and easy way to differentiate wall connectors that have billing enabled or not.

For example a white connector could be the normal non-billing connector, and one with a red face plate could be a billing connector. Maybe put on a label like “Destination Charger” to reduce confusion.

Further and optionally, you could equip the red face plate with some sort of tab or switch that activates the billing module. This purpose would be to prevent billing unless the red face place is in place.

The business could put up helpful signs, but that wouldn’t be required since that ultimately does not control billing.

What Can You Do About Telsa Billable Wall Connectors?

Let Tesla know that you don’t want to put up with automatic billing from generic-looking wall connectors.

And Let me know in the comments what you think of this auto-bill feature.
Did you know about this? Do you like it?

And check out this gem: “Property managers will soon be able to set the price of charging sessions.”

I think I’m going to buy that Wall Connecter pedestal and put one of these stealth billing wall connectors at the end of my driveway. Then, I’m going to set the price to $100 per kWh. What about you?